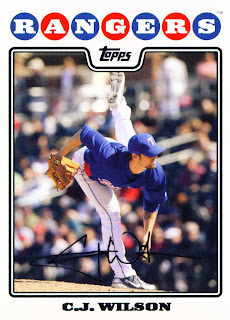 The Rangers managed to take the final game of the homestand last night as they topped the Devil Rays 7-2. That keeps them ahead of the Angels by 3.5 games as the Halos also won.

C.J. Wilson, shown here on card number TEX13 of the 2008 Topps Texas Rangers set, got the win with his dominant performance. For five innings Wilson was perfect. Literally. I was wondering if a no-hitter was in the making.

Of the first 15 batters Wilson faced he struck out seven, got six on fly balls and two on grounders. Going into the sixth inning C.J. was cruising. Then Casey Kotchman smacked a chopper and Wilson tried to grab it with his left hand. That stung a finger on his pitching hand and cost him his control. He struggled through the rest of the inning and was pulled in the seventh after facing two batters. C.J. later made a point of saying that his finger is fine and he will make his next start. Ron Washington confirmed that report.

No worries for Wilson though as the bullpen came in and kept the Tampa Bay bats quiet. The two runs credited to Wilson were the only two they were able to score.

On the other side of the ball Ian Kinsler knocked two long balls while Michael Young smacked one. Kinsler seems to have recovered his home run swing recently. As is normal when he does that he is hammering home runs in bunches. Hopefully he won't fall so much in love with his power swing that it hurts his ability to get on base. On the other hand, the home runs sure are nice.

All in all it was good to see the win and even better to see Texas take the series 2-1. That puts them past one of their difficult series left in the season. On to Boston!