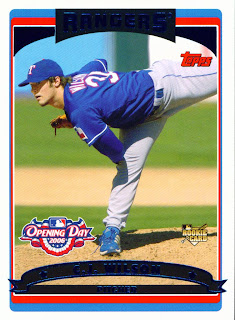 Have house guests in right now. Ironically it is my brother and his family. I say that because my brother is a big A's fan. Big. You cut the guy and he would probably bleed green and gold.

Last night C.J. Wilson, shown here on card number 161 of the 2006 Topps Opening Day set, shut down the A's. In eight innings Wilson gave up just five hits and one walk while striking out eleven A's. Oakland was unable to score any runs against C.J. but they did get a lone run off Koji Uehara in the ninth to spoil the shutout.

Meanwhile the Texas offense jumped on Oakland pitching for eight runs. Adrian Beltre in particular led the charge with to home runs as he went 4-for-5. He also picked up three RBI. Craig Gentry and Ian Kinsler both had 3-for-5 nights join in the barrage.

What made the night really ironic was that the victory officially eliminated the A's from contention for the 2011 season. Sorry bro.
Posted by Spiff at 9:55 PM

On Friday, my preacher and his wife were at the Rangers game, posting updates as the hits kept coming! It was fun to live vicariously through them!

It's been fun to watch C.J. pitch lately.

David - Very cool. Great of them to do that.

PAP - I know. I'm running out of C.J. Wilson cards to post after his great performances and that's a good problem to have.