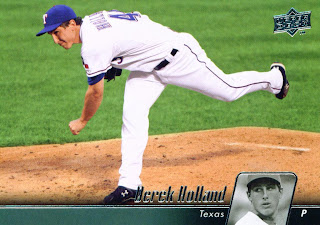 Listening to Derek Holland, shown here on card number 502 of the 2010 Upper Deck set, pitch can be very frustrating or very enjoyable. If he's off he's going to get shelled. If he's on it's going to be a fun night for Rangers fans and a difficult night at the office for the opposing offense.

Last night Dutch was on and it was a long night for the Red Sox offense in Boston. Over seven innings Derek allowed just two Boston hits and didn't walk anyone while striking out six. One of the hits he allowed was to Jacoby Ellsbury. Shortly after the hit Holland picked Ellsbury off first to negate his hit.

In the eighth inning the bullpen took over. Perfect innings by recent call-up Merkin Valdez and recent acquisition Michael Gonzalez left the final score at 10-0 Rangers.

Several Rangers had a decent night at the plate but David Murphy was perhaps the hottest. Murph went 4-for-5 with two runs scored and a RBI. The RBI came on a home run. Kinsler also went deep and, amazingly, so did Elvis Andrus. The much-heralded Leonys Martin made his Major League debut and managed a single off Tim Wakefield in his only at-bat.

Nice to see Murphy and Kinsler getting hot coming down the stretch. Especially nice to see Holland turn in a spectacular performance to get his 13th win and give the bullpen a break. This game gives Texas 17 shutouts this year. That ties them with the 1977 squad for the team record. The win also bumped the Rangers divisional lead up to 4.5 games as the Twins thumped the Angels.