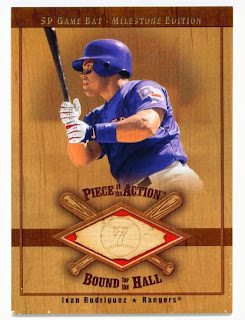 The Rangers 3-1 victory last night over the Angels finalized their season record at 96-66. Starter Matt Harrision turned in an acceptable performance and Mike Naopli knocked in all three Rangers runs.

The win also moved the team past Ivan Rodriguez, shown here on his 2001 SP Piece of the Action card, and the rest of the 1999 squad. The 2011 club now stands alone as the having the most wins in franchise history. That leaves the 1999 team in second and the 1977 squad in third. Very nice achievement.

In addition to a franchise record, the win last night also gave the Rangers home field advantage for the American League Divisional Series. That will start tomorrow at 1600 in Arlington. The red hot Tampa Bay Devil Rays will be coming in fresh off their upset of the Yankees last night. Both teams are hot and both are hungry. This will be an interesting series. Hope to see a repeat of last year.
Posted by Spiff at 11:18 AM