A milestone and some convoluted reasoning. 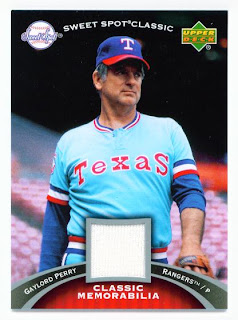 Ok, so today's card, 2007 Sweet Spot Classic #CM-GP, has a very weak connection to the events of the past couple of days. There is a connection though so hang in there.

At least the Rangers took two of three from the A's on this road trip. That was in part due to C.J. Wilson's performance in last night's game. Wilson didn't get the win but he did keep the team in the game to set up the late inning scoring that comprised the 3-2 win.

Gaylord Perry never struck out 200 batters in a season when he was with Texas. He is in the Hall of Fame though. So is Nolan Ryan. Since I have no game-used or signed cards of Nolan or C.J. that I haven't already posted, that's as close as I could come. Still, puts C.J. Wilson in some pretty impressive company.
Posted by Spiff at 9:39 PM