One up on Detroit and one base to go. 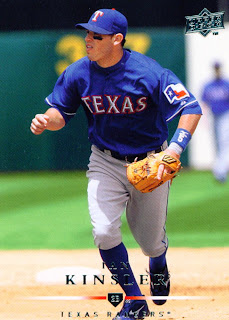 Well, the Rangers sent a patchwork lineup against the Mariners on Saturday as most of the regulars got the day off. Manager Ron Washington even pulled starter Alexi Ogando after just two innings.

In spite of facing Felix Hernandez, the Texas subs came up with a big win as they downed Seattle 7-3. Meanwhile Detroit lost to Baltimore. That put the Rangers by themselves as the second best team in the American League. If they can hang on to their lead over Detroit that will give them home-field advantage in the first round of the playoffs.

Yesterday several of the regulars were back for the final home game of the regular season and the fireworks really went off. Derek Holland allowed a Seattle home run as did Darren O'Day out of the bullpen. Yorvit Torrealba single-handedly answered for Texas as he knocked a pair of long balls, one of which was a grand slam. Adrian Beltre and Ian Kinsler both homered as well to help bring the final score to 12-5 Rangers.

Ian Kinsler, shown here on card number 218 of the 2008 Upper Deck set, also stole two bases in yesterday's game. That brings his season total to 29. Couple that with his 31 home runs and he is on the verge of his second 30/30 season. 2009 was his first. If he can steal just one more base against the Angels in the last three games of the season he will be there. You can bet that Ron Washington and Gary Pettis will be looking for a chance for Kins to run.

Along with Ian Kinsler's 30/30 chase the Rangers are also looking to stay ahead of Detroit in the win column. Since Texas is headed to Anaheim and Detroit is playing Cleveland at home that could be kind of tough.
Posted by Spiff at 2:47 PM