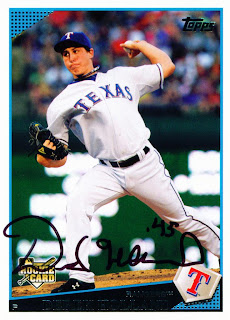 Let me start off by saying that I don't have any more signed or game-used cards of Josh Hamilton. Thus, in spite of launching a grand slam last night, Josh does not appear on this Thursday.

Standing in for Josh is Derek Holland on a signed 2009 Topps card that I got in trade a while back. Derek had one of his good nights last night. In seven innings Dutch struck out six while walking three and allowing six hits. The Indians scored just one run off of him. Darren O'Day and Merkin Valdez both worked scoreless innings to nail down Holland's 14th win of the season.

Another nice win. Very good to see Derek Holland have a good outing. As inconsistent as Dutch can be, he seems to be gradually putting it all together. Could be a very nice piece of the rotation in the very near future. Great to see some homegrown pitching make good.
Posted by Spiff at 7:30 PM

We were there last night! The first three innings were boring (unless you're a Shelley Duncan fan), but they started rockin' and rollin' and the ball was jumpin'! We sat in right field, lower homerun porch, section 44. It was dollar hot dog night and the weather was great!