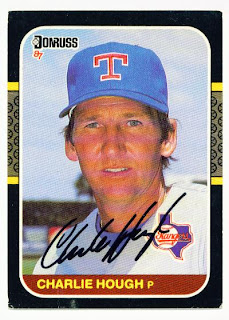 Well, today's a travel day and there's not much else going on in Ranger-land.

Since I don't really feel motivated enough to do justice to one of T.R. Sullivan's lists, I'll just post this 1987 Donruss card of Charlie Hough. I sent this card to Mr. Hough back in the early 1990's I believe. It was when he was still a big name in Texas.

Charlie was nice enough to sign and return the card for a young Rangers fan. Hough always did seem to be a class act and was great at signing. That's probably why he was one of my early Ranger favorites.
Posted by Spiff at 7:03 PM