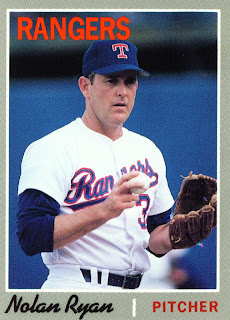 Some of you might remember a post from March of this year where I talked about Nolan Ryan's prediction of the Rangers 2011 season. Ryan, shown here on card number BBC45 of the 1992 Baseball Cards Magazine set, had said that he thought that the Rangers would win 90 to 95 games and would win the division. He wasn't discounting the A's or Angels but thought that Texas would pull it out.

At the time I asked if anyone had any comments on the prediction. Mr. Napkin Doon was full of hope and looking forward to full years from Kinsler and Cruz. At least he got a full year from Ian.

LoCoDe commented that Nolan pretty much had to predict positive things in their opinion. They also thought that the Rangers would drop off a bit to maybe 86 wins.

Well, the night before last the Rangers won their 90th game of the season. With six left to play their record stands at 90-66. I would be pleased but very surprised if the team wins all six of the remaining games but I also doubt they will lose all six. Even a 3-3 record will put them squarely in Ryan's prediction window. With the magic number down to two and a five game lead it is also looking more and more like the division crown belongs to Texas again.

Apparently Nolan knew his stuff!
Posted by Spiff at 10:54 AM

They did win all 6 games!! Even Nolan didn't know how good this team would be!