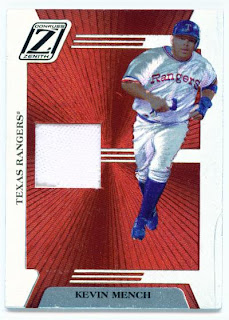 Dipping into the auto and game used box for this week's installment and we find this Kevin Mench jersey card. It hails from the 2005 Zenith set, number ZB-61.

When I got this card, Mench was still a member of the Rangers. Not that his being gone will stop me from picking up other game used cards featuring him in a Rangers uniform. If it's Rangers, I want it.

This particular card came in as the result of a trade that I made on the forum that got me going in online trading. I actually didn't start on The Bench but on a smaller board that has since pretty much died out. After I got good and going I moved to The Bench.

If you look on the lower right of the card you can see a scratch starting at about the height of Kevin's ankle and going to the bottom of the card. My trade partner didn't tell me about that defect. Of course he also didn't send the card until I called and talked to his parents. There is the downside of trading online. You never know who you are dealing with, might just be some kid who has no sense of responsibility. Of course there are also many adults who have no sense or responsibility.

Fortunately though, most traders are much better than that. I have almost 200 online trades under my belt and have only had problems on three or four of them. In my view that says volumes about the generally great folks who trade online.
Posted by Spiff at 8:38 PM

The jersey in the picture of Mench reminds me of those shiny satin jackets from the disco era.