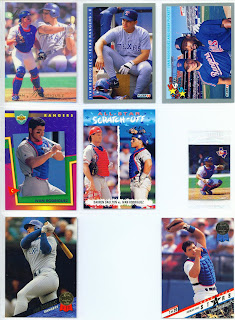 Well, Texas dropped their last game in Boston to fall four short of .500. Need to get going if they are going to end the season even. Might be hard with the upcoming series against the Angels.

Had to leave the empty space for the 1993 Leaf Fasttrack #15. Of these eight cards I would have to say I like the Flair one the best. I am a sucker for nice photos and colors combined with good card stock. Not really sure what the Humpty Dumpty card is from. It is still sealed in plastic, almost like it was a prize in a snack food or cereal.
Posted by Spiff at 11:50 AM

This is such an awesome site. I loved collecting the Rangers when I was a kid. This Pudge collection brings back a ton of memories. I'd recommend you go to Sports Lots vs. eBay to fill up some holes in your collection. You can get a ton of cards for less than a quarter and the shipping prices on Sports Lots are a lot more reasonable than those on eBay. Keep up the great work.

It's going to be TOUGH to get back to .500 with our schedule. 18 games, including six with the Angels and three with Detroit. I'm not real confident about the seven with Oakland either. :-/

PAB - Thanks for the comments and kind words. I usually only use Ebay to buy bigger cards or stuff that I can't get on Sportlots. It is a much better place for filling sets.

Micah - The seven with Oakland may be our only hope for .500. With them stumbling perhaps the guys can chalk up some wins.