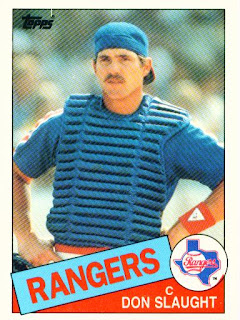 Don Slaught can't believe what he is seeing. At least it looks that way on card number 107T of the 1985 Topps Traded set.

Sometimes I feel like Don, standing there with hands on hips and a look of mixed disgust and disbelief on his face. Being a Rangers fan can do that to a person.

Last night the guys lost to Oakland. Lost the game. Lost second place. Lost their chance at a .500 record this year. They play the A's twice more and then finish the season with three in California against the Angels.

With a 75-81 record, the best the Rangers can do is one game short of .500. Of course that will mean that they take the next two from the A's and sweep the Angels. That would mean an entirely different team than has been playing would need to show up. If that happens it might change the face of the season. It might even change Don's expression to one of surprise.
Posted by Spiff at 4:20 PM

Slaught was no Rick Stelmaszek, but he was pretty good. In fact, I think Slaught was just a bit too good to be considered for a little project I am spearheading. My friend Chuck and I are working on a Backup Catchers Hall of Fame (BCHOF). I think Slaught might have risen above the standard mark, thus eliminating him from consideration.

Let me know how the project turns out. I would like to see it. Thanks.