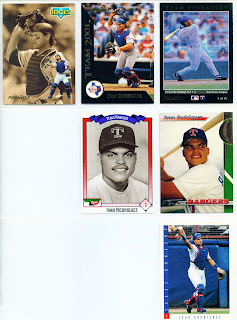 Hello, hope that everyone is having a great Monday. Mailed out Dodgers and White Sox lots today so those are gone. Be sure to let me know if you are interested in trading for any of the other team lots I listed.

As for the cards in the page, I must say I like the Keebler the best. It is part of a set that was given out at the ballpark over eight different games in 1993. If you can get the whole set you have cards of every player, coach, and manager who ever appeared in a Rangers uniform up to that point. Cool concept and a great way to get cards of players who never had a regular issue card in a Rangers uniform. What they need to do now is a second series that takes up where that one left off and comes through the current year.
Posted by Spiff at 10:15 PM

Rangers cards are on their way Wednesday!