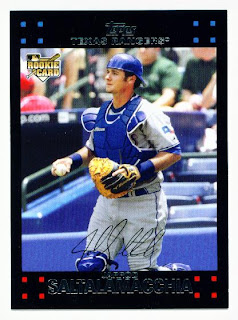 Yesterday Texas called up Taylor Teagarden. Last night Jarrod Saltalamacchia went down with a strained forearm ligament that will likely cost him the rest of the season. Teagarden saw himself go from the third catcher to the second in less than twelve hours.

I find is somewhat ironic that Salty strained his forearm on a play. He certainly didn't do it signing for the fans in Kansas City when I went to see him and the rest of the Rangers last week. Several fans were there early and asked him politely to sign as he left batting practice. He didn't even deign to acknowledge their requests. Just looked past them and spoke to a friend before heading into the clubhouse.

Needless to say, I was less than impressed. If you don't want to sign, fine. I think that players would be well served by such simple PR but each to their own. Be polite about it though. If folks are going to ask courteously and refer to you as mister then at least take the time to say, "Not now." Of course, that might be a strain.
Posted by Spiff at 4:44 PM

We must have been standing near one another during one of these games. I was perturbed at Salty's lack of acknowledgement. Fans on the road should not be ignored.

I was at the Monday game in KC. I thought I saw you after we were done trying to get autographs but didn't stop because I wasn't sure. While asking for autos my son and I were standing at the end of the Rangers dugout by the photographer's pit.