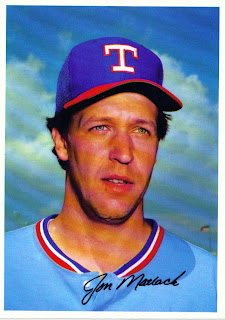 Decided to post a Matlack card today because my Matlack collection survived the final four and is now in the final match-up for The Benchies. This poll I am up against a pretty impressive Andruw Jones collection. I have a feeling this vote will be pretty tight, no matter which way it comes out. Win or lose though, I am pleased with how far the collection has come.

In other news, several people have contacted me about the team lots I listed for trade a couple of posts ago. I have a deal finalized on the White Sox and have them packaged for Monday mailing. The Rockies and Dodgers are in negotiations to go. As for the rest, well go ahead and get in touch with me folks and let's trade!
Posted by Spiff at 7:56 PM