Death of a thousand cuts. 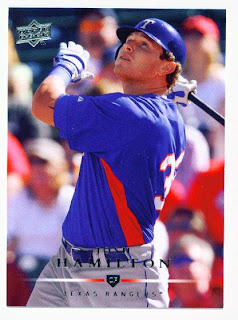 Today we see Josh Hamilton on Upper Deck's 2008 card number 671. Josh is looking good here as he takes his swings at the plate.

Hamilton appears to be feeling pretty good in this picture. Probably better than he is feeling today after fouling two pitches off his right foot in last night's victory over Oakland. After doing that he eventually had to leave the game in the eighth inning. Now the Rangers' site is saying he is day-to-day. Bummer.

Josh's injury is just the latest to plague Texas this year. Each seems small in its own way but they all put stress on the team as a whole and are a big part of the reason the team is stumbling. From the season-ending surgeries to the abscessed teeth and sore backs, the guys are looking pretty beat up right now. Hopefully they can rally to finish strong, rest and recuperate over the winter and be set to run hammer down next spring.
Posted by Spiff at 4:48 PM