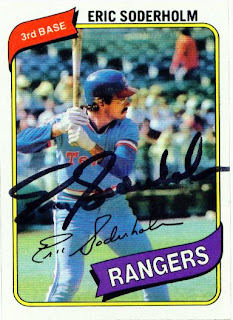 Today's card is number 441 in the 1980 Topps set. Eric Soderholm. This card was already autographed when I picked it up on Ebay as part of a Rangers signed lot. You really have to wonder what Mr. Soderholm was thinking as he attached his signature to this card. Did he find it mildly amusing that the card already had a facsimile of his autograph? Did he think about signing over the facsimile? Did he just sign without noticing the facsimile?

Well, Round 2 of The Benchies is winding down with just over 24 hours left to vote. It is looking like the Rangers collection will come in third in a three-way final. I am getting smashed but at least I finally broke double digits in votes. It is looking as though a Packers collection might well take first with a Red Sox collection posting a respectable second. The Matlack collection is faring a bit better and appears to be poised to advance to the final four. It will be interesting to see if it can hold on in the final hours of polling.

As a final note, most everyone is aware that this is the seventh anniversary of the 9-11 attacks. I have not forgotten this and do not mean to be making light of the fact by not mentioning it earlier in this post. Much has been written and said today. Most of what is out there is very appropriate. I recognize the day and have observed it with proper dignity. I will leave the commentary to others more worthy than I.
Posted by Spiff at 9:42 PM

Eric is a good signer, although I have failed to get his brother's. Dale played some minor league ball.