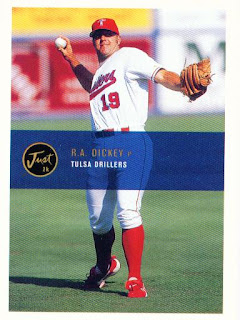 Today's card features R.A. Dickey and his trademark high socks. Here we see him on card number 33 of the 2000 Just minor league set. R.A. appears to be warming up before a Tulsa Drillers game.

So why, with the season still active and a win to talk about, post a card of a player no longer with the Rangers? Simple really, I don't have any cards of Matt Harrision. See? Clear as mud, right? Let me explain.

Last night Matt Harrision shut the Oakland A's down. Out really. He threw a complete game shutout in Oakland. That gave him eight wins on the season, the most ever of any Texas rookie lefty. It was also the first complete game shutout by a Rangers rookie since Dickey accomplished the feat in 2003.

So there you have it. A nice 7-0 win for Matt Harrision and a cardboard appearance for R.A. Dickey, thanks to a lack of Harrision cards in my collection. Hopefully that shortcoming in my collection will soon be remedied.

Speaking of the collection, it got the bronze in the 2008 Benchies awards. The Matlack collection managed a victory last night over a Scott Kazmir collection. It is now facing off with an Alvin Davis collection. This one will probably be a nail-biter.
Posted by Spiff at 12:03 PM

Well, we totally get your logic.