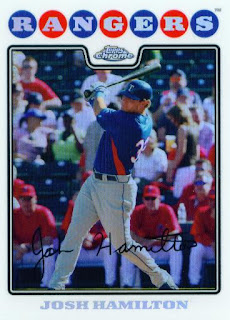 Today's card is my most recent arrival. It is the refractor version of 2008 Topps Chrome number 116. I got this Josh Hamilton off of Ebay for about $0.90 shipped. I figured you can't beat that. Now that I have the card, I like it more in person than I did on Ebay.

Well, my Rangers collection made it through the first round of the team collector voting on The Bench by defeating a Red Sox collection 65-22. I am now in a three way final vote and am in third place trailing a second BoSox collection as well as a Packers collection. Due to the lack of entries there were only two rounds in that category.

As far as the Matlack collection goes, it won in the first round of the player collection contest, 75-15 over a nice Phil Hughes collection. It is now leading in the second round going up against a pretty fine Scott Kazmir gathering. If it can hold on it appears that the next round will be the final four where I am assuming that I shall meet defeat.
Posted by Spiff at 8:33 PM

Great card - I'm really glad they updated the picture for Topps Chrome from what they used in base Topps.