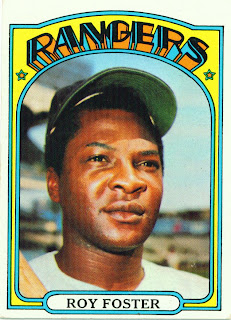 So far things seem to be coming along nicely at Spring Training. The Rangers played their first intrasquad game game yesterday. The highlight of the game was Nelson Cruz's grand slam.

Every year in Spring Training there are players who just don't impress or for some reason don't make the cut. Some are then sent to the minors, some released, and some traded. Roy Foster apparently belongs in the last category but with an unusual twist.

Foster, seen here on card number 329 of the 1972 Topps set, never played a major league game for the Rangers. We have already seen that situation with a couple of other players. What makes this one strange is that Roy never played for the Senators either. All three of his Major League seasons were with the Cleveland Indians.

In December of 1971, after two years with the Tribe, Foster was dealt to the newly minted Texas Rangers. Apparently Topps then finalized it's 1972 set. Then on April 3, 1972 the Rangers shipped Foster back to Cleveland. Roy then played the 1972 season with Cleveland before his playing career ended. Strange series of events to be sure. At least Roy wasn't traded for a player to be named later and then sent as that player.
Posted by Spiff at 11:43 AM

I enjoy those cards that feature players who never played for the team that they're depicted with.

One of the very recent ones was Johnny Estrada with the Mets in 2008 Topps Heritage.