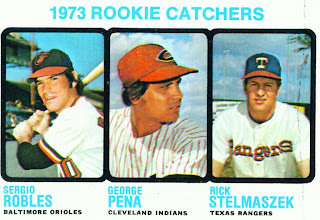 Yesterday I got a bubble envelope from John at Johngy's Beat. I opened it to find that I needed every card that he had sent.

John sent all of the 1981 Topps Traded cards that I needed to complete my team set. He also sent four 1972 Topps cards that knocked off a big part of the remaining portion of my team set from that year. The last card in the envelope was this 1973 Topps, number 601. I was thrilled to receive this addition to my collection.

Sometime back I had asked if anyone had any Rangers cards they would like to see me post. John was gracious enough to reply and stated that he would like to see a card of Rick Stelmaszek. Sadly, I had no cards of Rick in my collection and was ashamed to admit that I hadn't heard of him.

In addition to being married to John's third grade teacher and being a great neighbor, Rick was a catcher for several years in the majors. He actually debuted two years before this card was issued, playing in six games for the senators. In 1973 he played in seven games for Texas before being traded to the Angels. At the end of the 1973 season he was traded to the Cubs. He spent 1974 in Chicago before ending his MLB career. Thanks Johngy, both for the cards and the great history lesson!
Posted by Spiff at 11:06 AM

By the way as an additional note on Stelmaszek...He is currently the longest tenured coach with any team in baseball. He will be starting his 29th season with the Twins.