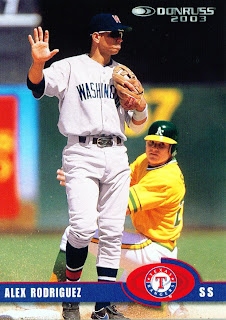 Apparently when the picture was taken for card number 206 of the 2003 Donruss set Alex Rodriguez suspected that his failed steroid tests would come out in the wash. He appears to be telegraphing his response to the news; talk to the hand, I ain't listening.

As much as I have always considered A-Rod to be overpriced and somewhat arrogant, I am saddened by the news. Alex had the chance to break Bonds' home run record and be considered clean while doing so. Not anymore. Now A-Fraud or A-Roid seem to be appropriate nicknames. Guess it all goes to show that when you lie it will come out eventually.

Of course this will lead to the inevitable Hall of Fame discussions as well. Rodriguez was considered a first ballot inductee. Is he still? In my mind he is not. In fact I don't think he should be in at all. Why? Well, my reasons really have little to do with steroids and more to do with consistency. Mark McGwire never failed a steroid test and has never been credibly implicated in steroid use, yet he is denied entrance to The Hall. If Big Mac can be denied based on his failure to prove a negative then A-Rod should be denied based on his failure that proved a positive.
Posted by Spiff at 12:40 PM

Echoing my sentiments exactly. There is no place in the Hall of Fame for someone like him.