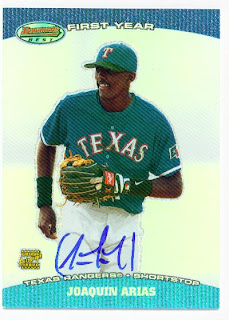 The Rangers have their first full squad workout of the spring today. From this point the jockeying for position begins.

One of the players most involved in the proving process will be Joaquin Arias. Arias, seen here on card number BB-JA of the 2004 Bowman's Best set, was at one point considered an excellent defensive shortstop prospect. He was supposed to eventually replace Michael Young as that player aged.

A couple of years ago Joaquin had to have shoulder surgery. He has been trying to come back since then. The surgery, and the injury that required it, weakened Arias' shoulder to the point that he could no longer make a solid throw from short to first. When Ian Kinsler was injured last season the Rangers called up Arias but limited him to second due to his shoulder.

As a result of his recent limitations, Arias was passed on the prospect ladder by Elvis Andrus. Andrus is now being given a shot at the starting shortstop job while Arias is being looked at as a possible utility infielder. He says though that his shoulder is back to full strength and he can make the throws from short. This spring may be his best chance to prove it.
Posted by Spiff at 11:20 AM