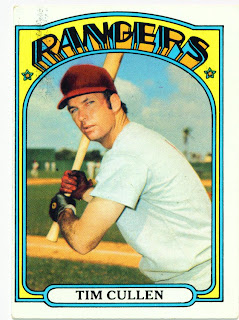 Not much happening today on the baseball front other than continued drama in the Alex Rodriguez saga. Since I am already tired of that I am going skip it.

Today's card is number 461 in the 1972 Topps set, Tim Cullen. Along with Denny McClain, Tim Cullen's last season with the team was 1971. He never actually appeared in a Rangers' uniform. Texas released him in March of 1972 and the A's picked him up for that season. That would be it for Tim.

The thing that strikes me about this card is the incredible innovation of the Topps photographer. After seven previous cards of head shots we now see a posed photo from the waist up. Wow! What's next? Action shots?
Posted by Spiff at 9:10 PM

I have a bunch of these '72 Rangers cards. It's striking how much Tim Cullen stands out next to the others.

I like the airbrushed, logo-less cap - pretty fitting for a guy who didn't play for the team.

That is one hairy left forearm. I guess the airbrusher ran out of energy before dealing with that.