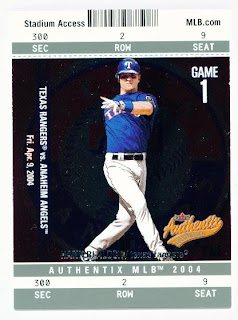 Reggie Jackson was called Mr. October because he always seemed to wait until his team was in the post-season to get hot. Well, here we have Mr. September. Now that the Rangers are eliminated, Hank Blalock couldn't be much hotter. I doubt he waited on purpose but that's how it worked out.

Blalock, seen here on card number 99 of the 2004 Fleer Authentix set, has homered in each of Texas' last four games. Today he sent a three run shot out of play to break the game open for the Rangers. They then proceeded to shell the A's 14-4 for a second straight win. At least they ended the season at home with a win.

It is nice to see Hank back in form again. There are all kinds of rumors floating that he may not be back with the team next year. Nobody seems to know for sure, but the possibility is there that he might have just played his last game in a Rangers home uniform. Nice way to go out if that turns out to be the case. Hope for a successful season next year if he ends up staying.
Posted by Spiff at 9:40 PM

I like Hank. It has been a shame that he has had so many problems with injuries.

He is one of my favorite Rangers Third Baseman.