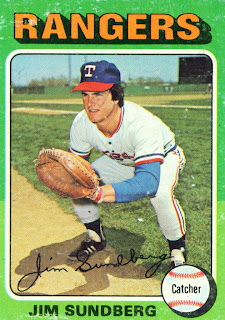 1975 Topps card number 567 is Jim Sunberg's first card. He had played for Texas in 1974 and had impressed. 1975 would be his sophomore season and he was out to prove that he wasn't a flash in the pan.

Unfortunately Sunny fell victim to the dreaded Sophomore Slump. In 540 plate appearances he batted just .199. His on-base percentage was only .238. One of Jim's problems was that his walks dropped to 51 while his strikeouts rose to 77. He also seemed to struggle a bit with his power as he hit nine doubles (four less than the previous season), no triples, and six home runs. A small bright spot was that one of those homers came on his birthday.

Defense was a whole other matter. In 1,316 innings behind the plate Jim posted a .981 fielding percentage. While that was two points lower than the league average he still finished second to Thurman Munson for a Gold Glove. That was probably due to his arm. Jim picked seven runners off first and one off second and third during the season. He also caught 65 would-be base thieves for a 46% caught stealing percentage. That was a good eight points above the league average.

The Rangers had confidence in Jim Sundberg. Enough confidence that they played him in 155 games - a number that tied the American League record for catchers. Sunny's glove and arm were what inspired most of the confidence but the team seemed certain that his bat would return in 1976. If it did then it appeared that Texas had found their backstop of the future.
Posted by Spiff at 6:48 PM