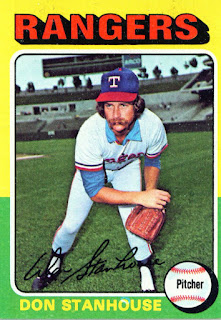 Part of the Rangers return for trading Denny McClain, Don had spent three seasons with Texas. On December 5, 1974 the Rangers traded Stanhouse and Pete Mackanin to the Expos for Willie Davis.

Davis would play part of the 1975 season for the Rangers before being traded to the St. Louis Cardinals on June 4th. In return the Rangers got pitcher Tommy Moore and shortstop Ed Brinkman. Proving that it's a small world, Ed was one of the players the then-Senators gave up to get Denny McClain. Brinkman's homecoming would last one game and then he was sold to the Yankees on June 13th.
Posted by Spiff at 6:37 PM