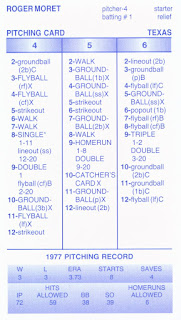 The Rangers picked up pitcher Roger Moret from the Braves in the Jeff Burroughs trade in December of 1976. Rogelio turned in a decent 1977 season as you can see from the numbers on his 1977 Strat-O-Matic card.

On April 12, 1978 Moret was scheduled to start a home game against the Detroit Tigers. Before the game he was spotted standing in front of his locker holding a shower shoe. He was not moving and did not respond to his teammates. After some initial joking, the other players decided there was a problem and reported the situation to the Rangers medical staff.

Roger remained unresponsive as he was evaluated. After 90 minutes he was finally loaded up and taken to a psychiatric hospital. He was not released until the end of the month. In spite of a couple of comeback attempts, the episode was effectively the end of Rogelio's career.
Posted by Spiff at 7:17 PM