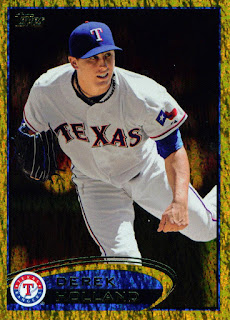 Ok, mixed news out of camp today for the Rangers. Let's start with the less than positive word first.

MLB.com is reporting that Neftali Feliz left today's game after three innings with shoulder stiffness. So far there hasn't been any additional word on the situation. It could be just a temporary bump in the road or possibly something worse. Last year Feliz spent a couple of weeks on the Disabled List early in the season with stiffness in his right shoulder. Hopefully this time it doesn't take that long to resolve. In the meantime I am guessing that Alexi Ogando is being told to be prepared for anything, or everything.

On a more upbeat note, Texas announced this morning that they have signed a five year deal with pitcher Derek Holland. Apparently there are also a couple of club options on the end of the deal that could push the total contract time to seven years. This deal looks good to me. Holland, shown here on card 34 of the 2012 Topps Golden Moments set, has developed well the past couple of seasons and is showing potential to be an ace at some point in his career. Couple that with the decreasing the number of pitching injuries since the Ryan/Maddux era began and this deal is definitely good news. If Darvish works out and Dutch performs as expected the next few seasons could be good ones for Rangers pitching.
Posted by Spiff at 5:55 PM