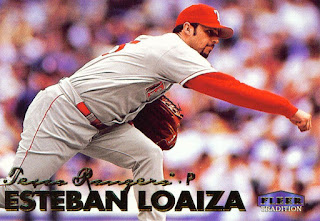 On July 17, 1998 the Rangers traded Warren Morris and Todd Van Poppel to the Pirates. In return they got pitcher Esteban Loaiza. Loaiza, shown here on card 485 of the 1999 Fleer Tradition set, lasted with Texas until July 19, 2000. On that date the Rangers traded him to the Blue Jays.

While with Texas, Esteban Loaiza never had an ERA under 4.50. His highest season win total was nine games. Not exactly a barn-burner.

In return for Loaiza, Toronto sent two players to Texas. The first was pitcher Darwin Cubillan. Darwin's Texas experience was a train wreck. In 17.2 innings pitched he posted a 10.70 ERA. In May of 2001 Texas sent him to Montreal.

Clearly the Michael Young trade helped make the Rangers what they are today. He's had an impact far above what Texas gave up to get him in 2000.
Posted by Spiff at 8:40 PM