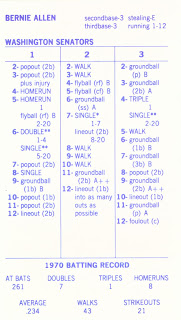 Up to number 15 on T.R. Sullivan's Top 50 Bizarre Moments in Rangers history. For today's post we have to go back to Washington. In 1970 Ted Williams was in his second season as the Senators manager. He was also not very popular among his players.

On August 2, 1970 the Senators were playing the A's in Oakland in the first game of a doubleheader. By the third inning the Senators led the game 3-1. To start off the third the A's pulled their starting pitcher. In response Williams began to revamp his lineup.

By the time Bernie Allen, the starting second baseman, was due up with two outs one batting substitution had already taken place. Williams proceeded to send Tim Cullen to the plate to bat for Allen. Cullen then flied out to end the half inning.

I'm not sure if it was being pinch hit for so early in the game or if it was the result but Bernie Allen didn't like being pinch-hit for. Apparently he lost it and it took six other people to restrain him from going after Williams in the dugout.

Take a look at Allen's 1971 Strat-O-Matic card. The card shows his 1970 stats. Seems like a stretch for a .234 hitter to get riled at Teddy Ballgame for lifting him. Of course Williams sent in Tim Cullen who batted .214 on the season. Cullen was also the player that Williams called one of the dumbest hitters he had ever seen. That leads to what was probably the real reason for the blowup.

Ted Williams and his players never got along well. Williams didn't have much patience with his position players and he hated pitchers on principle. That doesn't endear a manager to his men. Bernie Allen was one of the players representatives and personally didn't care for Williams. Probably the mixture of Williams attitude, Allen's attitude, and the perceived slight became explosive as under the pressure of another losing season.
Posted by Spiff at 4:55 PM