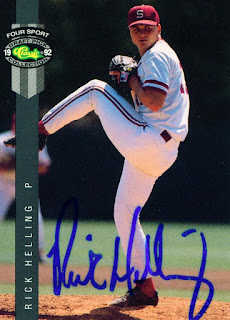 Number 18 on T.R. Sullivan's 50 Best Seasons list is Rick Helling's 1998 performance. Here is what T.R. has to say about his pick:

Helling was 20-7 despite a 4.41 ERA, but he had some big wins for a division championship team, and his .741 winning percentage is the highest for a Rangers pitcher with at least 200 innings.

Helling, shown here on a signed 1992 Classic Four Sport card, was probably the ace of the 1998 Rangers. His win totals are impressive. Other than the win totals though I would have to question his inclusion on this list. Win-loss totals are not always within the pitcher's control but his individual numbers are.