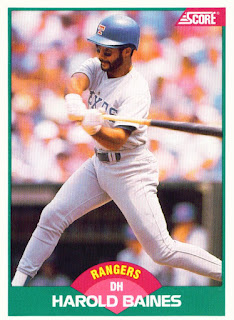 In 1989 the Rangers were in the midst of a rebuilding stretch. They would end up finishing in 4th in the American League West with a 83-79 record. That was to be expected. What was not expected was the trade that took place on July 29th.

Texas obtained the services of Harold Baines, shown here on card 62T of the 1989 Score set, and Fred Manrique from the White Sox. In return the Sox got Scott Fletcher, Sammy Sosa, and Wilson Alvarez. The trade was a disaster for Texas.

By the time he found himself in Arlington, Harold Baines was a full-time DH. He didn't like playing in Texas and the Rangers ended up trading him in 1990 to the Oakland A's. In return Texas got Scott Chiamparino and Joe Bitker. Neither pitcher ever panned out for the Rangers. Between trades Baines appeared in 153 games for Texas - almost a full season's worth. He hit .288 and managed a .363 on-base percentage and a .428 slugging percentage. Not bad for a position player but short of expectations for a DH.

Fred Manrique lasted through the end of the 1989 season with Texas and played in a total of 54 games. His .288 batting average and .318 on-base percentage were higher and lower respectively than Fletcher's .239 and .323 prior to the trade. The two were about interchangeable in the field. In April of 1990 Texas traded Manrique to the Twins for a career minor-leaguer and cash.

Meanwhile Scott Fletcher played three more years for Chicago and made up for the absence of Fred Manrique. Wilson Alvarez spent all or parts of seven seasons with the White Sox. His combined record was 67-50 and his ERA 3.76. When the Sox finally traded him in 1997 one of the players they got in return was Keith Foulke. Sosa spent just three seasons with the ChiSox. He wasn't anything to write home about with his total .227 batting average and .276 on-base percentage but he was a sight better than what the Rangers got in return.

All in all the trade worked well for Chicago and spelled trouble for Texas. Two promising young players gone with nothing long-term to show for the loss. There wasn't even an immediate return as the team ended 1990 with the same 83-79 record that they had in 1989.
Posted by Spiff at 4:07 PM

As far as Sosa goes. I think the White Sox made a much worse deal than the Rangers with the George Bell for Sosa trade. So at least you have that. But yeah it still wasn't a good trade at all.

The Rangers were expected to do better than 83-79 in '89. There was a lot of talk in the pre-season about them contending and then they got off to a 17-5 start and got Nolan Ryan on the cover of SI. The Baines trade wasn't a bad move at the time. They needed a bat and Baines was a perenial All-Star DH for the White Sox.