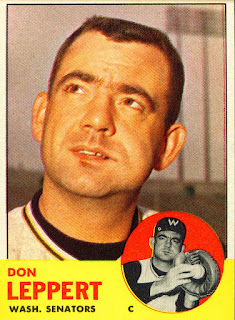 1963 was Don Leppert's first season with the Washington Senators. In December of 1962 the Senators had picked him up from Pittsburgh in exchange for a career minor leaguer. That's why he appears in his Pirates uniform on card number 243 of the 1963 Topps set.

Leppert and Ken Retzer platooned behind the plate with Retzer getting more playing time. Don still managed to appear in 73 games and actually got named to the All-Star game as a reserve. He didn't play but at least he got named to the team.

In the 477.1 innings Leppert played behind the plate he committed five errors for a .984 fielding percentage. That was just five points shy of the league average. Apparently he had trouble handing runners though as he threw out just 14% of those attempting to steal on him.

On offense Don made 234 trips to the plate and posted a .237 average. Thanks to his 20 walks his on-base percentage managed to get up to .305. In spite of striking out nine times more than he walked, Don really didn't have much power. He hit just six long balls and 11 doubles.

Despite being named to the All-Star team, 1963 had been a let down season for Don Leppert. His batting average and on-base percentage had both fallen from the previous season even though his playing time had increased. He had also seen his fielding percentage and runners caught stealing percentage fall. If Don wanted to stick with Washington he would need to step up his game all around for 1964.
Posted by Spiff at 9:14 PM

That's a great expression, isn't it. Here are some more guys from the '60s who love their chaw: