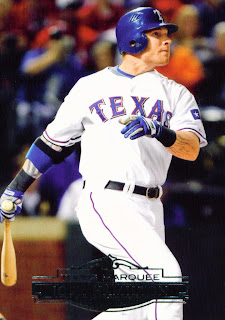 Sorry about the lack of a post yesterday. Traveling back from a funeral in Texas. Managed to get Saturday and Monday's posts done and scheduled but just didn't get yesterday's finished.

Well, Ian Kinsler was back in action today coming off his lower back tightness. That's good.

Josh Hamilton, shown here on card 88 of the 2011 Topps Marquee set, left today's game against the Rockies after one at bat. The team says he jammed his right heel trying to chase down a double. Word is that the injury is "not serious." I still don't like it. Foot injuries have a tendency to become an ongoing concern.

Elsewhere on the team, pitcher Matt West is done for at least six weeks with a strained UCL in his throwing arm. Mike Napoli is still day-to-day with a strained groin and Craig Gentry is getting his sprained wrist re-evaluated.

Craig's got to be a little concerned about the wrist sprain. After all, a sprained right shoulder cost him his chance to make the team last Spring. Hopefully he can get his wrist healed up and get his bat going. Looks like the Rangers are going to need all the outfield depth they can get.
Posted by Spiff at 9:00 PM