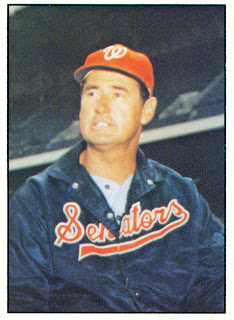 The Senators going to the the Wrong Bob directly led to today's installment in T.R. Sullivan's Top 50 Decisions list. One of the first things that Bob Short did after naming himself as General Manager was to fire manager Jim Lemon and hire Ted Williams.

From 1964 to 1967 the Senators had been making slow but steady improvement under manager Gil Hodges. The wheels came off in 1968 under Lemon and the team plunged to the American League basement. The team desperately needed direction. What they got was Ted Williams, shown here on card number 260 of the 1978 TCMA set.

It is certain that Bob Short figured that Williams' name and fame would bring the Senators attention and put fans in the seats. He may have even thought that Williams would be a decent manager. At least he got a few headlines and one winning season out of the deal.

During his playing career Ted Williams was known as one of the most prickly personalities in the game. He often grew short tempered with players of lesser ability and focused almost solely on his hitting. He made statements about how he hated pitchers and his attitude seemed to back it up. When he retired he stated that he was done with baseball and would never be interested in managing.

A five year contract worth $500,000 changed Teddy's mind. Unfortunately it didn't change his attitude or way of dealing with others. After a winning season in 1969 that attitude and demeanor started to catch up with him and the ballclub.

Three examples of Williams' managing style help explain why perhaps his players might not play well for him. While riding in a cab, players Dick Nen and Tim Cullen stopped to pick up Williams. Williams thanked them by explaining to Nen that he could be a pretty good hitter if he changed the type of hitter he was. Cullen then asked Ted what kind of hitter he thought Cullen was. Ted told Cullen that he considered him to be the dumbest hitter in the league.

With a large lead and pitcher Casey Cox struggling on the mound, Williams walked to the end of the bench where the other pitchers were sitting. Looking at them he said, "I never liked pitchers when I was playing and you all aren't giving me any reason to start now."

Late in a ballgame in 1972 Williams needed a pinch-hitter. Approaching a young Tom Grieve he said, "I guess you're all I got left. Get out there and see if you can do anything."

Quick housekeeping note: I will be dealing with a death in the extended family over the next few days. I will try and schedule posts but obviously won't be able to post on any news out of Spring training.
Posted by Spiff at 7:01 PM