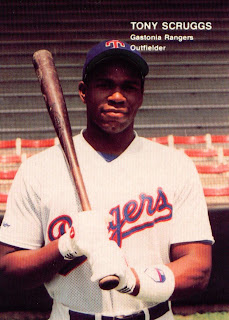 Tony Scruggs, seen here on card number 19 of the 1990 Best set, had been drafted twice. Both times he had been drafted in the 7th round of the draft and had eventually signed with Texas in 1987.

1990 would be no different for Tony than his previous seasons. He would play in 75 games for Single A Gastonia. In 309 plate appearances he would post a .307 batting average and a .380 on-base percentage. He would hit eight home runs and 16 doubles. He also struck out 57 times while walking just 26 times.

Scruggs would also play in 53 games for Double A Tulsa. He got 215 plate appearances there and actually raised his batting average to .344 while bumping up his on-base percentage to .392. He also hit four home runs, six triples, and five doubles. Ominously, he struck out 50 more times while picking up just 14 walks.

Tony Scruggs had turned in a decent season in 1990. He had managed to climb another rung in the Rangers farm system and had an eye on Triple A for the 1991 season. The strikeout to walk ratio was a problem though. Tony needed to cut down on the whiffs and practice some more patience at the plate. If he could do that and keep his offensive numbers up he would be on the right track.
Posted by Spiff at 3:09 PM