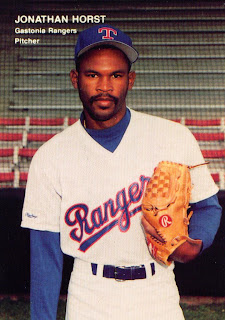 Card number 105 of the 1990 Best set is an uncorrected error. Horst was not Jonathan's last name. According to baseball-reference his last name is Hurst.

Both the Mariners and the Reds drafted Hurst in the 1986 draft but he didn't sign with either team. Texas drafted him in 1987 in the 4th round of the draft and convinced him to sign.

Hurst started the 1990 season with Single A Gastonia as shown on this card. In 15 games and 61.1 innings pitched he tallied a 2.64 ERA. That got him six games and 12.1 innings with the Charlotte Rangers at A+ Ball. A 2.19 ERA there got him bumped up to Double A Tulsa.

Jonathan seemed to hit the wall at Tulsa. In eight games he pitched 25.2 innings. Unfortunately he could not duplicate his success at the lower levels. His ERA rocketed up to 9.47.

1990 had started out very well for Jonathan Hurst. It hadn't ended anywhere close to as well as it started. If he wanted 1991 to be a different story he would need to master the jump from Single A to Double A.
Posted by Spiff at 12:04 PM