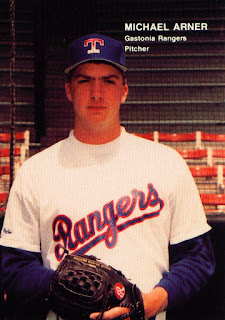 Sorry about the lack of a post Saturday. Had a busy day and before I knew it the day was gone and so was the chance to post. Taking a quick look at the Rangers news I don't see anything earth-shattering coming out of Spring Training yet. Good time to take another trip to the farm.

Michael Arner, shown here on card number 200 of the 1990 Best set, was drafted by Texas in the 13th round of the 1989 draft. He played Rookie ball that year for the GCL Rangers.

In 1990 the 19-year-old would start the season with the Gastonia Rangers in Single A. Mike started all 14 games he appeared in for Gastonia and won eight of them. In 88.2 innings he posted a 2.03 ERA and a 1.015 WHIP. His 86 strikeouts fell just short of one an inning.

Those numbers got Arner promoted to A+ ball. He started all 12 games he played for Charlotte. In 78.2 innings his ERA rose a bit to 2.97. His WHIP shrank though to 0.928. He also picked up 72 more strikeouts.

All in all 1990 had been a successful season for Michael Arner. He had performed well for two different farm teams. If he could build on that performance he just might be able to reach the upper levels of the minors in 1991.
Posted by Spiff at 12:11 PM