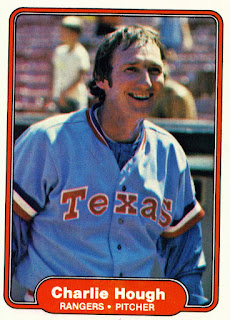 Long-time Ranger pitcher Charlie Hough shows up here on an off-kilter 1982 Fleer card, number 319 in the set. He also shows up at number 19 on T.R. Sullivan's list of the 50 best seasons in Rangers history.

Charlie gets mention due to his 1987 season. In 1987 Hough was both the workhorse and ace of the Texas pitching staff. He started a league leading 40 games that year and pitched a league leading 285.1 innings while completing 13 games. He would win a career high 18 games. His ERA totaled to 3.79 and his WHIP to 1.269. He also struck out a career high 223 batters.

What makes those numbers even more remarkable was that Charlie was 39 years old in 1987 - an advantage of throwing the knuckleball. A second circumstance was that the team record that season was 75-87. That means that Charlie Hough alone accounted for 24% of the team victories in 1987. Now that's pretty impressive.
Posted by Spiff at 5:27 PM

I love this card.