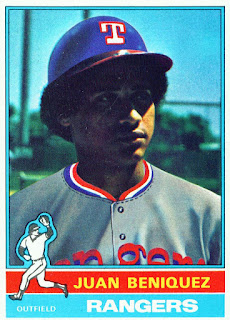 Kind of frustrating last night listening to the ballgame. After playing the Angels hard, the Rangers couldn't score more than one run against the Royals. On top of that, a rare Adrian Beltre error led to two unearned runs to give Scott Feldman the undeserved loss. Time to start through the 1976 Topps team set.

Juan Beniquez appears in an obviously airbrushed uniform on card number 496. Gotta like the buttons and stitches around the collar. The reason for the airbrushing is that Juan came to the Rangers on November 17, 1975. The trade that brought him to Texas also brought Steve Barr and Craig Skok to the Rangers. In exchange Texas sent Fergie Jenkins to Boston.

Moving from a fourth outfielder role with the Red Sox, Beniquez became the Rangers everyday center fielder in 1976. In 141 games he logged 1,169 innings in center. His .986 fielding percentage was five points higher than the league average and his 18 assists were a league best. In fact, they were the most by an American League outfielder since Bobby Mercer managed 21 with the 1974 Yankees.

Juan made 526 plate appearances on offense. His batting average totaled to .255 and his on-base percentage to .315. While Beniquez didn't have a lot of power (he hit no home runs), he did have some speed. He managed to steal 17 bases while getting caught six times.

In retrospect Beniquez's performance in the field had probably been everything that the Rangers were hoping for in 1976. Unfortunately his offense had tailed off significantly from the previous season when he played with Boston. Juan was safe for the immediate future but he needed to get the offense up if he wanted to keep showing off his cannon arm in the outfield.
Posted by Spiff at 1:57 PM