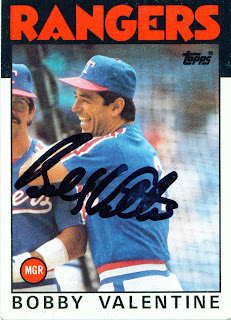 What a beating last night. From the Mariners too. Ugly. Coming off two losses in a row to Seattle the Rangers seem like they can use today's day off. I'm going to take advantage of it by looking at the next installment in T.R. Sullivan's Top 50 Decisions the shaped the Rangers.

Number 28 on Sullivan's list is the firing of manager Bobby Valentine. Bobby V. had been hired in 1985 after the firing of Doug Rader. He would manage the team up until he was fired midway through the 1992 season. At the time of his firing Bobby was the longest tenured manager in the history of the franchise. He was also probably the most popular with the fans.

Valentine, shown here on a signed 1986 Topps card, had a winning record with the Rangers in five of the eight seasons he managed. That is saying something when you consider the players he was given to work with in the early going. By 1992 though the management was looking to compete.

After losing two straight games to fall to 6.5 games behind first-place Minnesota, Bobby was done. Managing partner George W. Bush handled the firing and told the media that Valentine was a good guy but that the team was concerned about the pennant race getting away from them. It did anyway.

Interim manager Toby Harrah was unable to turn things around as he went 32-44 for the remainder of the season. The Rangers finished at 77-85 and in 4th place. Maybe firing Bobby V. with his 45-41 record wasn't the best course of action.
Posted by Spiff at 9:18 PM