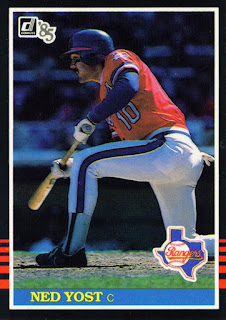 Looks like the guys are on track for a win in Houston tonight barring an Astros rally. Since the game is still in progress though I don't want to jinx it by commenting. Instead we'll take a look at one of the Top 50 Strange Moments in Rangers history.

Coming in at number 27 we have Ned Yost, shown here on card 221 of the 1985 Donruss set. The December, 1983 Yost for Sundberg trade was one of the worst trades in Rangers history. This incident helps explain in part why.

In his lone season with Texas Yost appeared in just 80 games. Part of the reason for his low number of appearances was due to being on the disabled list.

Yost had been having trouble hitting and throwing out runners. Many people might have attributed that to the fact that he had been a back-up catcher for his entire Major League career to that point and was trying to transition to a full-time role at 29 years of age. Also, the comparisons with Jim Sundberg could not have been favorable in the minds of most observers. Manager Doug Rader wasn't buying. Something had to be wrong and it couldn't be his opinion of Yost and Sundberg.

Off to the disabled list went Ned. Why? "Excessive eyelid tension." The unique diagnosis was also described as "heavy eyelid tension." I thought that was what happened when you didn't get enough sleep. I never realized how serious it can be. It is though. At the time Doug Rader remarked that, "We're going to treat it just like knee surgery." Now that's bizarre.
Posted by Spiff at 9:58 PM