Kicking off the Silver Boot. 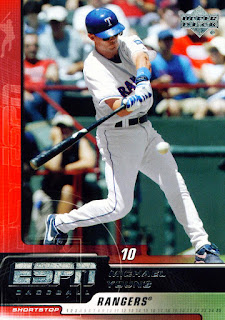 Good to see the offense pick up and help Neftali Feliz out. About the only gripe I have is that Feliz went less than five innings. Even though he gave up just one run he was pretty wild and appeared to have been experiencing one of his confidence stumbles.

Robbie Ross continued to impress out of the pen as he worked 2.1 scoreless innings. Would have been nice to see him get a day off but it's also nice to have him there to cruise through the middle innings. Koji Uehara handled the eighth and then Joe Nathan came out and worked a three up-three down ninth. Very encouraging to see him do that on his fourth outing in four days. Looks like he may be completely back to his pre-injury form.

Ian Kinsler, Adrian Beltre, and Michael Young all turned in good offensive performances. Michael gets the card of the day though, number 87 in the 2005 ESPN set. Mike gets the card because his 2-for-3 night ended an 0-for-11 skid that he had been on. Great to see him have a good night after struggling. Hopefully that's what it will take to get him on track and tearing it up again.
Posted by Spiff at 6:19 PM