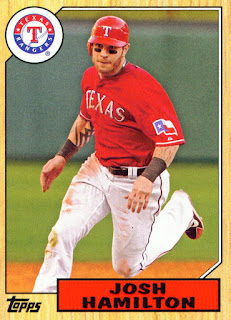 Posting Josh Hamilton's 1987 Topps Mini card from this year's Topps set tonight. Texas lost today but Hamilton's home run torrent is continuing as he launched another bomb in the loss.

That gives Josh nine homers in his last six games. Incredible. That's about the only word for it. He's even got Rangers manager Ron Washington expecting something to happen about every time he steps into the batter's box.

The latest onslaught brings Hamilton to 18 home runs on the season. That total leads the Majors. It also puts him on pace to possibly break Barry Bonds' single season home run record. Of course there are those out there who would claim that such a record would be just as tainted as Bonds'. I find that hard to believe with all the extra drug testing that Hamilton is required to undergo by his team and Major League Baseball.

Two big things are going to stand in the way of Hamilton continuing his tear. One is the opposing pitchers. They have already started to intentionally walk him - he leads the league with five intentional free passes so far. Of course the fact that Elvis Andrus is doing well getting on base ahead of him and that he has protection behind him will help minimize that trend.

The second thing that could derail Josh is injury. Hopefully that is a non-issue but with the way he plays all out it is always a possibility. Of course, if he didn't play 110% he wouldn't be Josh so having him back off is not really an option. I do wish that he would do something about his head first slides. They make no sense going into first base and I cringe along with Ron Washington every time he does it.
Posted by Spiff at 9:40 PM

Awesome. I for one would love to see him eclipse Bonds.