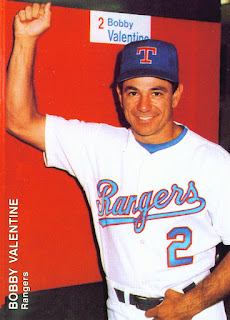 Extremely busy day today. Going to have to leave you with this pre-scheduled installment from T.R. Sullivan's list of the Top 50 Bizarre Moments in Rangers history. Today we see two involving managers and one a sportswriter.

Number 24. Help for Oates - T.R. doesn't give a date for this incident but he does recall that it happened at the Ballpark in Arlington. An irate Johnny Oates left the dugout to argue a call with third base umpire Jim McKean. The argument was barely started when a young man hopped out of the stands to join the confrontation. Apparently he agreed with Oates. That didn't make any difference to the security guards though, he was still hauled off.

Number 25. Valentine suspended - September of 1986. Another confrontation between a manager and umpire. This time the players were Bobby Valentine, shown here on card number 1 of the 1991 Mother's Cookies set, and Larry Burnett. Valentine went way beyond being tossed however, he ended up suspended for four games. That was because he moved from arguing the call to accusing umpire Burnett of having bet on the game. Surely Bobby V. would never say such a thing.

Number 26. Do Ya Wanna Dance? - One of the reoccurring post-game concerts for the Rangers in the 1980's were the Beach Boys. Lots of fun and even some dancing. One particular night Star-Telegram writer Jim Reeves danced on the ledge in front of the press box, all the way down to owner Eddie Chiles' box. Not sure if that occurred during Little Deuce Coupe or California Girls.
Posted by Spiff at 12:15 PM