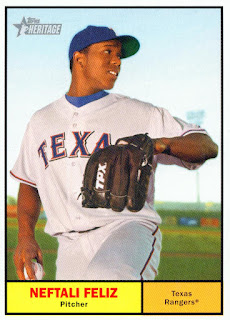 So the Rangers won 6-1 yesterday to take the series from the Astros. Obviously the offense showed up finally but Colby Lewis was the star of the game to be sure. Colby started the game and went 8+ innings. He was lifted after he allowed a lead-off home run in the ninth inning that ended his shutout bid. He allowed just three hits other than that home run and struck out six while walking just one. If that wasn't enough, Colby also jumped in on the offensive side of things. He went 2-for-4 at the plate. While he did strike out twice he also drove in two runs. Not bad at all for an American League pitcher. Steve Busby summed it up nicely, "Atta boy Colby!"

So that's the good news. Couple of items of concern coming down today as well. First is Neftali Feliz, shown here on card 459 of the 2010 Topps Heritage set. The Rangers won his last start on Friday but Neftali took a no-decision as he struggled with his control. Today the Rangers placed him on the 15-day Disabled List for shoulder inflammation. That probably puts him out of action at least until after the All-Star break. At least there were no tears or structural damage in Neftali's shoulder. Scott Feldman is currently slated to step into Feliz's spot in the rotation and Yoshinori Tateyama has been called up from Triple A to replace Feldman in the bullpen. Not sure if that will be the permanent fix or if something else will happen. Jon Daniels says that all options are on the table and that the club has not ruled out trying to sign Roy Oswalt. Hope it's an extremely cheap contract with lots of incentives if they decide to go that way.

The second item of concern comes from Triple A Round Rock. Here is the Rangers official release by way of T.R. Sullivan's blog:

Arlington, Texas—Pitcher Michael Kirkman was diagnosed in January with a form of skin cancer during an examination that took place in Gainesville, FL, which is near his off-season home in Lake City, FL. Michael is currently undergoing regular treatment in Round Rock and is being continually monitored by his doctors in both Florida and Texas. He is allowed to participate in full baseball activity while undergoing the treatment, and the prognosis is for a full recovery.

Scary stuff. Glad to see that a full recovery is expected. Always hope and pray for the best whenever I see or hear of somebody facing the cancer fight.
Posted by Spiff at 8:01 PM