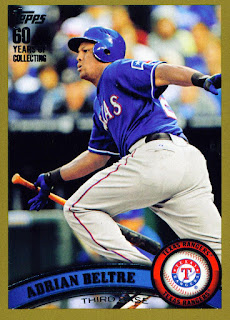 Apparently somebody responded to my post last night and located Derek Holland. Dutch turned in a nice 7.1 inning performance in Cleveland and allowed just two runs, only one of them earned. The second Indian run scored on a Mike Napoli passed ball.

Unfortunately for Derek, those two runs were enough to tie the game up and give him a no decision. Mike Adams picked up the blown save after he and Nap got crossed up. That sent the game into extras.

In the top of the eleventh Adrian Beltre came to the plate following two walks. The first was unintentional, the second was to Mitch Moreland to get to the pinch-hitting Beltre. Adrian, shown here on card US150 of the 2011 Topps Gold set, hasn't started a game in several days due to some hamstring concerns. The Indians must have been thinking that he would be cold coming off the bench.

Sadly for The Tribe, the intentional walk backfired. Beltre launched a three-run shot to put the Rangers up 5-2. Joe Nathan came in for the bottom of the eleventh. In spite of allowing one runner to reach base, he made the lead stand up. That stops the Rangers losing streak at three.

Couple of things about the game. First, it was great to see the shutdown version of Derek Holland show up. He got a tough break with the no decision but still pitched well deep into the game. In spite of the blown save the bullpen pitched well as well. Mike Adams, Alexi Ogando, and Joe Nathan all lowered their ERA's. Adams should have put the Cleveland fire out sooner than he did but I saw nothing to panic about.

Elvis Andrus was also a bright light tonight. Several outstanding defensive plays and a bunch of routine ones. No errors by him or the rest of the defense. Very nice to see that. Hopefully the defense will hold and the pitching continue to come around. The rest of the division is struggling and this is a good time to put some games between them and Texas.
Posted by Spiff at 9:33 PM