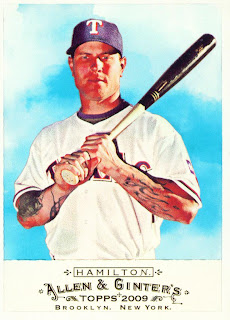 There isn't much to be said about Josh Hamilton's Tuesday night performance other than that it was simply a thing of beauty.

Josh, shown here on card 274 of the 2009 Allen and Ginter set, went 5-for-5 against the Orioles. That in and of itself is noteworthy. Of those five hits one was a double and four were home runs. That is historical. I believe that Hamilton is now one of 17 players to ever hit four home runs in a single game.

That is one of the most exclusive groups in baseball history. To help put it in perspective, more players have pitched perfect games than have hit four home runs in a game.

Of course the radio talk shows are all abuzz with speculation that Josh's performance is going to drive up his asking price as he goes into a free agency year. Perhaps. It's a long season though and Hamilton has a hard time playing full seasons. If he misses too much time on the Disabled List it could counter Tuesday night's performance. In the end though the ongoing contract negotiations will have to run their course. I will be surprised if a deal is announced before Josh gets to talk to other teams.

The second thing that folks are talking about following Tuesday night's game is Hamilton's legacy. Talk of the Hall of Fame, the single-season home run record, and a possible Triple Crown are in the air. As premature as contract speculation might be, this type of talk is even more so. Josh is dominating when he is healthy. Hopefully he remains healthy and can continue to dominate. However there have been many promising careers cut short by reasons as varied as the ballplayers who played them. The thing is, we may well be watching our generation's Willie Mays. We won't know for several more years though. What we do know right now is that Hamilton is something special with the potential to become something legendary.
Posted by Spiff at 9:05 PM

Just think where he'd be, numbers wise, without those lost years. Amazing.

If he hadn't lost those years we might already know if he is the second coming of Mays.