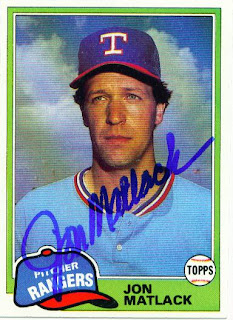 Extra innings loss this afternoon in Arlington. A's split the series and Mike Adams takes the L. Ends a seven game home stand at 3-4. Hopefully the guys can get it back on track against Houston. Might be a good time for another installment from T.R. Sullivan's 50 Best Seasons in Rangers History list.

Jon Matlack, shown here on a signed 1981 Topps card, had his best seasons with the Mets. However, he still had some gas left in the tank when he came to Arlington. 1978 was his first season with Texas and he joined a pitching rotation that included Fergie Jenkins, Doyle Alexander, and Doc Medich. Jon was supposed to bring some added firepower and he did.

Matlack made 33 starts and pitched 18 complete games for a total of 270 innings pitched. All three were team bests. His 2.27 ERA was also a team best, for the whole pitching staff. His 1.122 WHIP was second only to Fergie Jenkins. He tied Fergie for the team lead in strikeouts with 157.

Not bad numbers and the team stayed in contention as they finished second in the American League West. In addition to leading the team in several pitching categories that season, Jon also put his name in the franchise record book. His 2.27 ERA remains the lowest ever by any Rangers pitcher with at least 200 innings pitched in a season. Not too shabby.
Posted by Spiff at 9:45 PM